For the ultimate Quo experience: the sound, the energy, the show.

We are a Dutch Status Quo tribute band and well known as a festival band. We prefer to focus on a wide audience. We choose the sound, energy and dynamics of live recordings and shows over the often more polished studio recordings. Playing as many hits as possible is more important to us than guitar solos of more than 10 minutes.

To get as close as possible to the original sound of our heroes, we have chosen to distribute the vocals and guitar parts in the same way as Francis and Rick did. Two singers, with their own sound, who alternately fill in the lead or backing vocals. The guitar parts are also filled in as with the original: Francis lead guitar and Rick the rhythm parts. A unique Status Quo tribute band.

Book Status Quo Forever now for a festival (approx. 75 minutes) or a full show (approx. 2.5 hours). Expect a memorable performance from with the energy, sound and dynamics so typical for Status Quo , but which also does justice to the harmonious vocals / guitar playing of frontmen Rossi / Parfitt.

Of course we play all the big hits but also, especially for the fans, we complete the set with lesser-known gems such as Slow Train, Rolling Home and Big Fat Mama. We do not limit ourselves to the Frantic Four period. We believe that there are many good songs written after this period as well. Our mission is to introduce a larger audience to the fantastic songs of The Quo because this band deserves a wider interest. We play as many hits and accessible songs as possible and hope to reach new fans. Read more 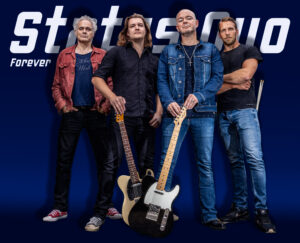